You are here: Home > Degas Pictures > "The Absinthe Drinker" 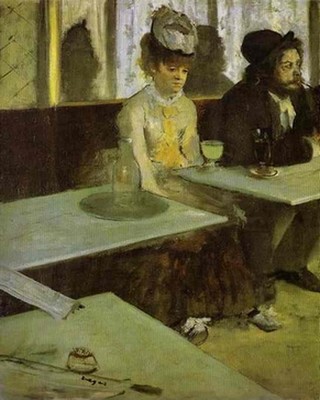 Absinthe is a powerful alcoholic drink which contains a high concentration of a poison from the Wormwood plant which has hallucinogenic properties. It was first produced in 1792 and reached the height of its popularity at the end of the nineteenth century when it was associated with the artistic life and was known as the 'drink of Parisian abandon'. In the early years of the twentieth century it was banned as a danger to health in many countries (including France in 1915).

The painting aroused strong feelings when it was exhibited in London in 1893. The choice of subject matter was thought unsuitable and the casual manner of depiction immoral and provocative. It seemed to express everything the British thought was degenerate and decadent about France, yet it was owned by a British collector.

This painting, was owned by British collector, Captain Henry Hill, who also possessed six other canvases by Degas - most of them of ballet dancers. L'Absinthe did not sell in Paris and was shipped to London and bought by Hill who lent it to the Third Annual Exhibition of Modern Pictures in Brighton where it caused a great stir in terms of both subject matter and its daring composition.

Would you like to write analysis and reviews of Degas' paintings? Pleace fill out our contact form. We are happy to publish your article!